Over the last 9 months, 1Love came together with allies and groups across the country who also work with their communities against criminal deportation, and the mass incarceration and mass deportation systems. We came together with a vision of breaking our isolation in this movement by creating a space for us to grow together. Through a collective process, this became The 1996 Blog! We are proud to present to you today the fruits of our collective thinking, vision, and commitment to this work and our solidarity with each other. Official release statement below, please share!

Monday April 28, 2014 – In the national controversy surrounding immigration reform, presidential action, and a nationwide grassroots call for an end to all deportations, community members being deported for criminal convictions have been largely left out of the policy conversations. The 1996 Blog was created to draw the immigrant rights movement towards an analysis that fully encompasses the need for reform of two laws passed in 1996: the Anti-terrorism and Effective Death Penalty Act (AEDPA) and the Illegal Immigration Reform and Immigrant Responsibility Act (IIRIRA), known as the “1996 Laws.” These laws created a standard of mandatory and indiscriminate double punishment of immigrant community members who have interfaced with the criminal legal system.

Quyen Dinh, Executive Director of the Southeast Asia Resource Action Center stated, “Our communities across the country have been suffering under draconian immigration laws for almost 20 years, the same laws that have fueled a surge in the number of overall deportations. It’s time for us, as an immigrant rights movement, to address the 1996 laws and demand change that protects and uplifts all of our communities.”

“It is an age-old tactic of those in legislative power to create divisions by simplifying experiences and creating an atmosphere of judgment and labeling that forces communities to throw each other under the bus,” said Mia-lia Kiernan, National Organizer of 1Love Movement, “We came together to create this online space to talk, write, discuss and demand that our community’s complicated experiences of incarceration and deportation in this country is not spoken for us, but by us.”

The 1996 Blog will cover issues such as the good immigrant/bad immigrant narrative, the War on Drugs, the root causes of forced migration, social movement history against criminal deportation, the prison-industrial complex, policing and racial profiling, the school-to-deportation pipeline, unjust 1996 welfare, criminal and juvenile justice reforms, and many others.

“We want to broaden the understanding of our experience”, stated Abraham Paulos, Executive Director of Families for Freedom, “We can’t continue to fight mass deportation without fighting mass incarceration. These systems work intentionally together to remove people from our communities and break families apart.” Opal Tometi, Co-Director of Black Alliance for Just Immigration, added, “This isn’t solely a movement for immigrant rights, this is a movement for racial, social and economic justice that rests in our country’s history of exploitation and oppression of communities of color.” 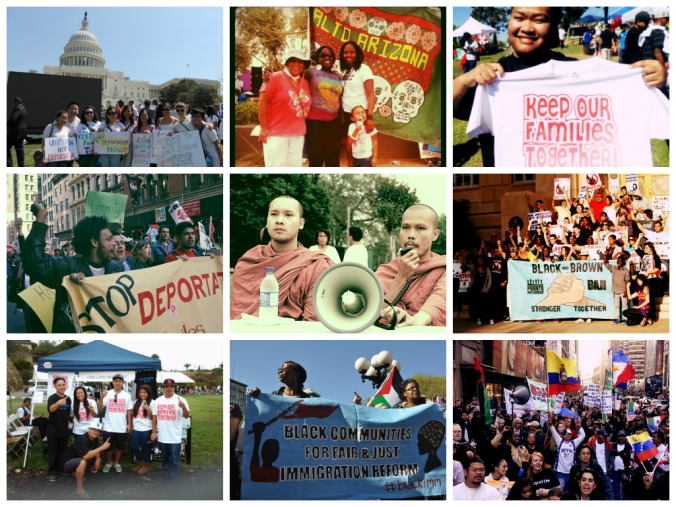